The epic saga of Star Wars has now spanned over three decades. Fans now span generations. While die hard fans of the original trilogy may have been critical of the more recent films and the acquisition of Lucasfilm by Disney in 2012, nothing can dampen the anticipation of fans young and old at the announcement that the Star Wars Sequel Trilogy is going to happen. Filming is said to be starting as early as January of next year.

As a result, collectors can expect the popularity of Star Wars toys to reach levels not seen since the late 1970s and 80s. The original toys are already getting huge attention on eBay. If you’re willing to part with them, the originals as well as other toys throughout the years will provide you with a good return at your local pawn shop. The renewed excitement and interest in Star Wars will make toys a hot item for both sellers and buyers at pawn shops.

Here are a few of the big ticket Star Wars toys: 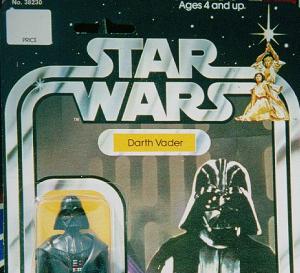 According to the Star Wars Action Figures Buying Guide on eBay (http://www.ebay.com/gds/Star-Wars-Action-Figures-Buying-Guide/26778/g.html), the most sought-after toy is the original Anakin since only a limited run was produced and these were released as a promotional item. Naturally, the Vintage Era toys are going to be the most valuable because they are the originals and are going to be the most rare. Toys that are still in the box are also going to hold more value than those that have been opened and used. So, if you have Star Wars toys from your childhood collecting dust in your attic, you might want to dig them out and pay a visit to your local pawn shop in CT.