Home > pawning > What do the 3 gold balls outside a pawn shop mean?

What do the 3 gold balls outside a pawn shop mean? 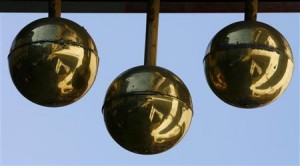 One of the most common stories about the origins of the pawnbrokers’ symbol traces back to the Medici family of Florence, Italy. The symbolic meaning is said to be drawn from Lombard, which comes from the Italian province, Lombardy. Pawn shop banking is said to have started under the name Lombard banking in this province.

The medieval Lombard merchants used the three golden spheres as a symbol. They are said to have hung the spheres in front of their houses. In Europe, a pawn shop was called the Lombard. In London, England, a banking family was called The House of Lombard.

The golden spheres are though to have represented byzants, which were gold coins at the time. The representation of the gold coins was laid upon a sable field in a heraldic manner. Later, the coins were changed to spheres to help attract more attention from passersby.

While the Medici family may not have been the original users of the symbol, there is a legend about how the three ball symbol made its way onto their coat of arms. The legend claims that a Medici hired Charlemagne to slay a giant using three bags of rocks. From that day forward, the Medici crest used the three balls. Other families adopted the use of the three balls because of the financial success of the Medici family. The gold balls were used throughout the Middle Ages on crests as a symbol of success.