Home > About > Going for the Gold 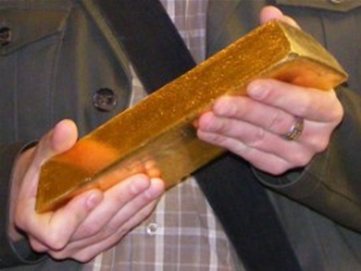 As the price of gold reaches a historic high, many residents rush to trade theirs in for cash.
By Christian Camerota

With the economy in turmoil, investors are going for the gold and area residents are selling theirs off.

The price of the precious metal reached an all-time high on Monday of over $1,700 per ounce as investors, leery of widespread market volatility, turned to the typically safe and stable commodity. Closer to home, however, area pawn shops reported a noticeable increase in residents looking to sell their gold, seeking either to capitalize on high gold prices or forced to do so because of economic struggles.

“[Business has] been pretty consistent for the past few years as the price has been going up,” said Mario Dillulio, manager of CT Gold and Silver’s Monroe store. “There’s been a larger influx in the past month or so…with the price being as high as it is, there’s definitely more people that notice it and come out and try to capitalize on it.”

“The best way I can describe it is it’s like having a bigger piece of the pie for everyone to share,” Dillulio said. “You get more slices out of it. The higher it is, the more money is in it.”

Though the approach varies by store, typically gold buyers, jewelry stores and pawn shops will take the current price of gold and offer somewhere between 5 and 20 percent less than that value to the seller. The buyer then will usually take the gold to a refinery and sell it for close to the current market price, where the gold is then melted down and turned into bullion used for investing.

Mineo said while the high current price of gold has pushed many to sell their spare stores, there are also a number of other factors driving the sell-offs.

“Maybe it’s people that have kept [their gold] in a dresser drawer and they say, ‘when it hits $1,600 an ounce, I’ll sell it,'” Mineo said. “I’m guilty of that myself…and then other people might just be doing an inventory on their possessions and find some jewelry that they’re just not using anymore and think, ‘hey, this has been sitting in my jewelry box for ten years, maybe I should try and get some money for it.'”

An interesting, concurrent trend during the economic turmoil has been a steady increase in people selling things they might not otherwise part with, gold included. Mineo said he’s seen the desperate times of the recent recession drive people to desperate measures.

“People are definitely selling things they wouldn’t normally sell,” Mineo said. “Right now, with the economy the way it is, you can’t go to the bank and get $50 or $100 to put food on the table. So, right now, the pawn shop fills a really good niche.”

Mineo opened his store a year ago with his son, Anthony, because he felt Danbury sorely needed a pawn shop with some commendable qualities. As a retired Waterbury police officer, he had dealings with pawn shops in the past and knew what made the successful ones.

“I knew that pawn shops could make a viable business on short-term loans,” Mineo said. “It doesn’t have to be that shady aspect of the business…there’s a real spot for a pawn shop that has some integrity and honesty.”

In the year since he’s been open, Mineo said his customer base has grown exponentially, particularly through word of mouth. He takes great pride in offering a fair price (something he says many of the gold buyers and pawn shops in the area did not do previously) and being able to help people out during tough times. The ability to offer those short-term loans has helped bolster his business, as well.

“One advantage we have over the gold buyers and jewelry stores is that we can give out those loans,” Mineo said. “We can loan people money based on the value of their jewelry and we’ll work with them on the interest. Then again, some people don’t want to worry about a loan. They don’t want to pay interest on it.”

“If I buy gold, I know I’ll at least make some money on it,” Mineo said. “A lot of other things we sell, I’m sticking my neck out a little bit on.”